Man Door Hand Hook Car Door is a trollpasta based on the urban legend known as “The Hook.” The folktale tells the story of a couple on a date in a car hearing a story on the radio about a psychotic fugitive with a hook for a hand. When they hear sounds outside their car, they investigate and find a hook attached to their car. Man Door Hand Hook Car Door retells that story in an intentionally absurd and grammatically incorrect manner. It reads:

man & girl go out to drive under moonlight. they stop at on at a side of road. he turn to his girl and say: “baby, i love you very much”
“what is it honey?”
“our car is broken down. i think the engine is broken, ill walk and get some more fuel.”
“ok. ill stay here and look after our stereo. there have been news report of steres being stolen.”
“good idea. keep the doors locked no matter what. i love you sweaty”

so the guy left to get full for the car. after two hours the girl say “where is my baby, he was supposed to be back by now”. then the girl here a scratching sound and a voice say “LET ME IN”

the girl doesn’t do it and then after a while she goes to sleep. the next morning she wakes up and finds her boyfriend still not there. she gets out to check and man door hand hook car door.

The earliest known usage of the story appeared on 4chan on June 19th, 2012 (shown below). 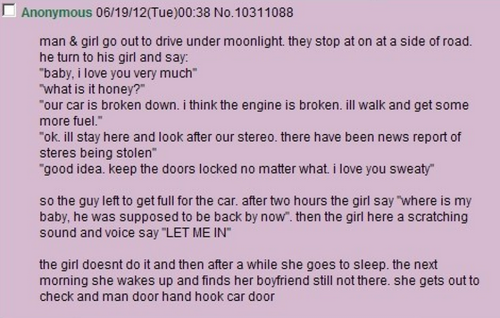 Man Door Hand Hook Car is based on the urban legend “The Hook.” According to fact-checking website Snopes [1] The website cites an early version, which appeared in Dear Abby in 1960 reads:

If you are interested in teenagers, you will print this story. I don’t know whether it’s true or not, but it doesn’t matter because it served its purpose on me.

A fellow and his date pulled into their favorite “lovers’ lane” to listen to the radio and do a little necking. The music was interrupted by an announcer who said there was an escaped convict in the area who had served time for rape and robbery. He was described as having a hook instead of a right hand. The couple became frightened and drove away. When the boy took his girl home, he went around to open the car door for her. Then he saw — a hook on the door handle! I don’t think I will ever park to make out as long as I live. I hope this does the same for other kids.

On February 28th, 2014, YouTuber That Guy With A Voice published a reading of the text. The post received more than 141,000 views in less than seven years (shown below, left). 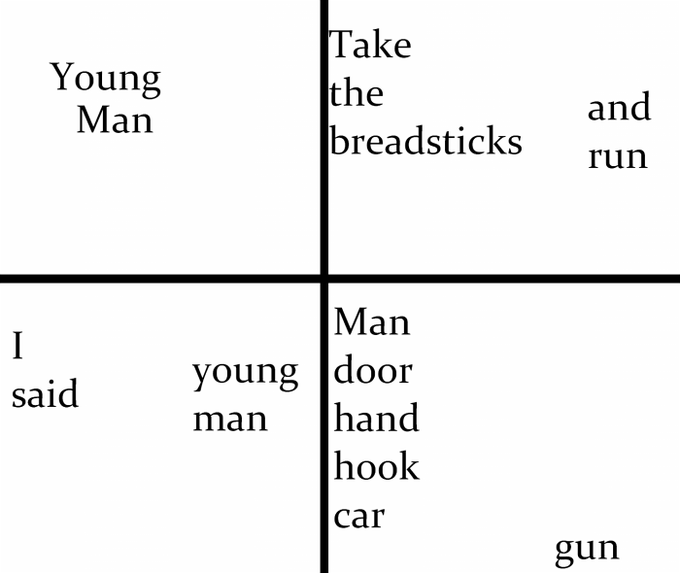